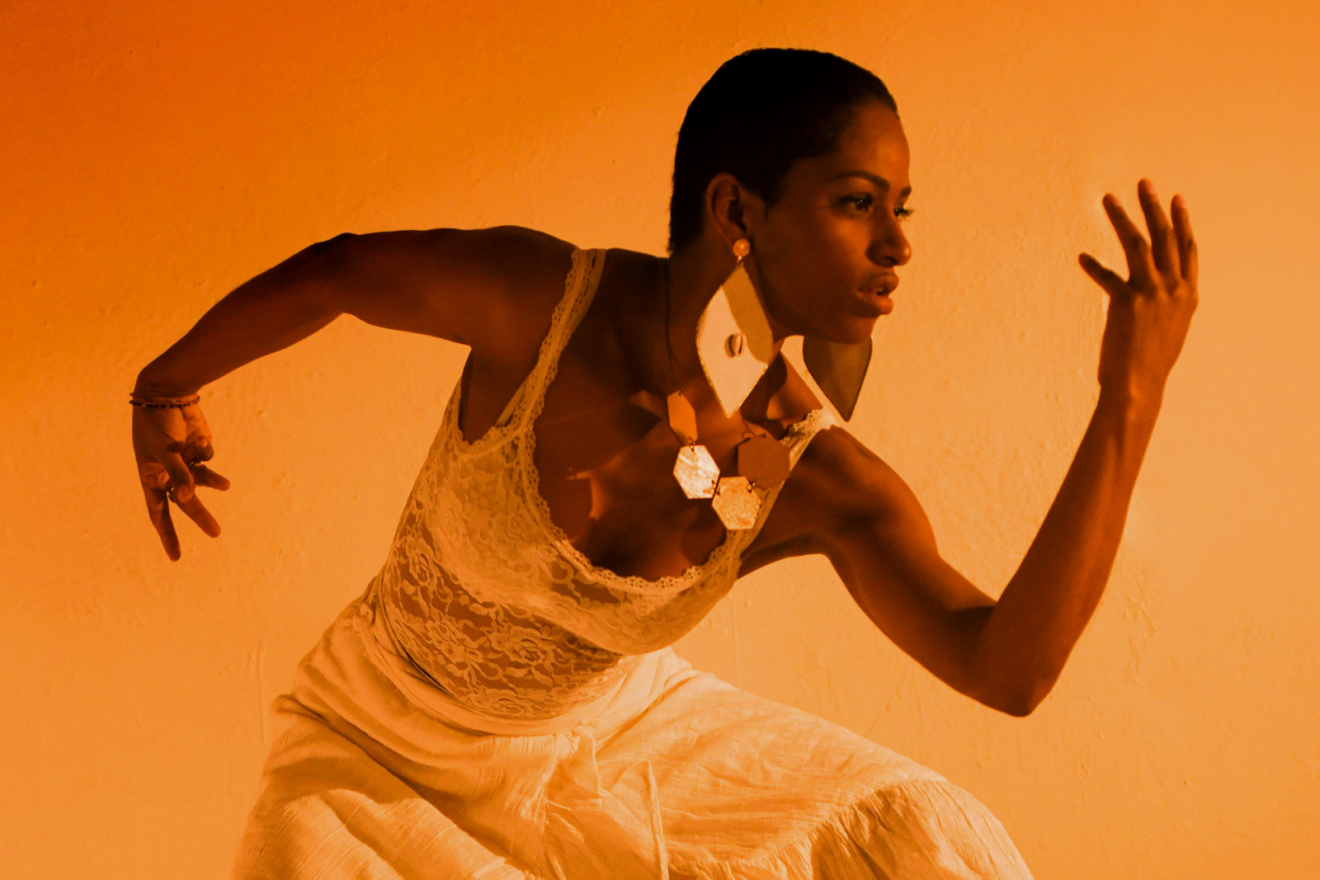 Top 8, Dublin Dance Festival, Carlow Arts Festival and Five Lamps Arts Festival have formed a consortium to exchange ideas, thinking and practice around how the four arts organisations can involve a wider range of voices to inform festival curation, programming and access.

This partnership will connect dancers and artists from different nationalities and diverse cultural backgrounds to better understand the lived realities of cultural diversity in Ireland with a focus on improving inclusion in a festival context and bringing a wider range of voices to festival curation and programming.

Inviting four artists to collaborate with the festivals, there will be space for reflection, movement and heightening understanding in how we think about and create more inclusive and diverse spaces.

Each artist will be hosted within the festival organisations, creating opportunities for them to engage with the programme of work, think alongside festival teams and staff, and participate in practical labs led by the artist’s own practice. This will offer practical experience and insight into the respective festival programmes allowing the participating artists to take part in thinking sessions, leading to shared thinking and collaboration between artists and organisations.

The first collaborative thinking session will be taking place on Friday 27 May, as part of Dublin Dance Festival's 2022 Edition.

The four artists involved in the Thinking Partnership are:

Alessandra Azevedo is an Afro-Brazilian dancer, Capoeira performer and instructor from Salvador, Bahia – home to the largest African diaspora population and Afro-Brazilian culture. Her practice is rooted in body movement to promote connections and cultural education, driven by the potential of her African Brazilian heritage and using dance as a tool to achieve it.

Since moving to Ireland in 2015, she has worked with Catherine Young, John Scott, Selma Daniel, Andreia Williams, Barra O’Flannaigh, Yves Lorrhan, Tatiana Campelo, Shiv Ross, Vivian Brodie Hayes, Justine Doswell, Deirdre Murphy, Simeon Smith and other artists. Alessandra is using her current Arts Council Bursary award to contemplate and deepen her skills as a performer and facilitator to establish herself as an ambassador of the Afro-Brazilian culture in Ireland.

Along with her dance group Criola Dance, Alessandra shares styles from the many African dances that were developed as a form of personal and artistic expression in areas where the diaspora settled. Alessandra shares the rhythms and dances that developed from these roots that still echo the strength, culture, resilience and beauty of ancient communities.

Matt Szczerek is a Dublin-based, contemporary-urban dance artist and a professional member of Dance Ireland. From 2014-2018 he has danced regularly with CoisCeim Dance Theatre, performing as a principal dancer in The Wolf and Peter (2017 Sydney Opera House), and in RTÉ’S 1916 Centenary performance at Bord Gais Energy Theatre, choreographed by David Bolger. His own choreographic work Emersion (2016) was performed as part of OIL&WATER (2016), a collaboration with Cathy Coughlan (HAVOC), supported by The Arts Council and South Dublin County Council. In September 2016, he collaborated with HAVOC again on Trans-Border for the launch of IN CONTEXT 4, South Dublin.

In 2017, Matt completed a residency at Dance Ireland where his research considered the points of intersection between urban dance notation and Laban Movement Analysis. Matt was selected by Far From The Norm dance company in 2017 to be part of an international cast for production UNION BLACK, funded by Creative Europe, which toured to the UK, France, Sweden and Ireland. In 2018 he presented Fable (Dublin Fringe Festival) which was nominated for a Best Ensemble Award. From 2018 until 2021 he has directed/curated Dance2Connect, the annual 3-day Urban Dance Festival at The Civic Theatre.

His other projects involve Lighting Design for Dance project supported by The Lir academy mentored by Liz Roche (presented early 2019) and national tour with a children's theatre piece Princesses can be Pirates choreographer by Monica Munoz Marin.

In 2019 Matt was an artist in residence in Rua Red Gallery Tallaght where he delivered an extensive programme of activities and local youth outreach.

At the moment Matt is a choreographer for two companies: Human Collective based in Ireland and Kundle Cru, an international company of multidisciplinary artists supported and produced by Crying Out Loud in the UK, preparing for the premiere of their latest work Blame Game which showed as a work in progress at Netherland Dance Festival 2020 in Den Haag and Circusstad Festival in Rotterdam.

Tobi Balogun is a Nigerian born, Dublin-based multidisciplinary movement artist working primarily in dance and fashion and through themes of racial context and masculinity. A professional member of Dance Ireland and founding member of Human Collective, Tobi has performed for and created community-led performances and projects with many artists/companies including CoisCéim Dance Theatre, Cathy Coughlan, and Story of the Sei.

As a dancer working in a theatre context, he has worked for choreographers such as David Bolger in LAOCHRA (2016), alongside Joanna Banks, Jessie Keenan and Glenna Batson and for Cathy Coughlan in OIL&WATER (2016) & TRANS-BORDER (2016). As lead artist, he has developed collaborative projects in association with choreographers Cathy Coughlan and Maria Nilsson Waller, and with organisations such as South Dublin County Council, Tallaght Community Arts, Dublin City Council and Dance Ireland. From 2018-2019 he delivered weekly classes at CoisCéim Dance Theatre as part of their Broadreach Programme.

In 2020, Tobi received an Arts Council Professional Development Award to engage with UK-based mentor Ivan Blackstock (Founder of Crxss Plxtform UK and Artistic Director at 180 Studios). He also received a Create Bursary Award to develop phase one of BLACK CANVAS - a research and development project relating to Black-Irish creatives and communities. Following this he was awarded the Create AIC Bursary, Collaborative Arts and Human Rights to further deepen the research, and he has since received an agility award to develop a new piece of intersectional Dance Theatre ‘Ara | Omi”, blending dance and spoken word with live music. A vivid afrocentric piece focused on storytelling through play.

Tobi has been dancing for over 20 years and supports the foundations of this dynamic and Influential dance form with his B-boy crew – RECESSION SQUAD NINJAS. Tobi is the curator and director of the hugely popular TOP 8 STREET DANCE BATTLE that brings together the best of Irish and International street dance and hip-hop artists to existing and new audiences – now heading into its 8th year, the event was part of Dublin Dance Festival For 3 consecutive years.

Tobi is a board member of CoisCéim Dance Theatre, part of Dance Sport Federation of Ireland/Breakin' Ireland Head of Athlete Commission and supported by the Arts Council of Ireland. As a dance facilitator, he has designed and delivered youth programmes teaching in schools, youth groups, and established dance organisations, and has brought his knowledge of hip-hop and breakin’ culture into a wide variety of youth and academic contexts.