Here Be Dragons - A Work in Development 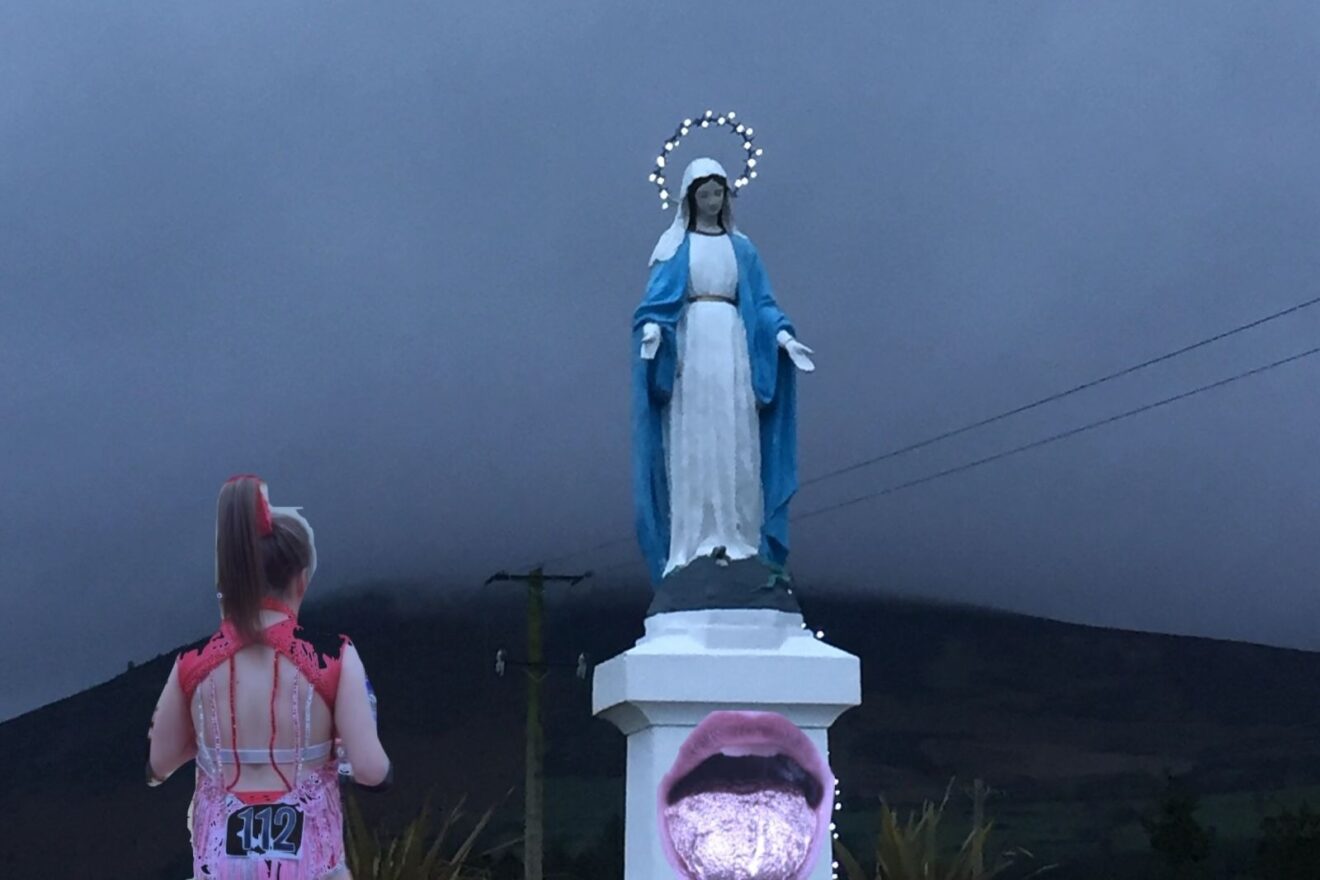 Here be Dragons is the first manifestation of a new work: A ceremony for Ireland, a mother as she opens and pours her heart out, screaming with emotion and hope. Shaking off the shame. Dancing against the weight of heaven. Stay awake son.

For my latest piece, which was shown as an in-progress work at the festival and is titled Here be Dragons, I’ve set out to create something that invokes Ireland, a place I characterise as female. I think a lot about the human impulse to reach for the ‘divine’, something beyond ourselves, beyond comprehension and wonder if this impulse could act as a unifying force for humanity, healing division. I spent a lot of time watching videos of Sufi Zikrs, of commercial dance kids in LA, Tibetan ritual dances, Dance Moms,Voodoo ceremonies, and spent time in a monastery, attending daily matins and vespers. They all have something in common: effort, exertion and intention. They’re all aspiring towards release and pleasure, whether it’s an immediate consequence or a state of being promised in the future.

I think with this piece, it’s not about pointing fingers, or telling the audience anything, or expressing negativity. Quite the opposite. We’re at a point now in the world where possibly compassion is the only thing that’s going to get us through. There’s so much division in the world today. It’s not about something, it’s for something, and this intention is where the idea of “ceremony” can hopefully be authentically felt. In this piece I’m really trying to get rid of a fourth wall that I felt has been very evident in my other work. This one is for sharing.

My thinking around Here be Dragons is partly to explore what the exertion and effort of dance can do – on a physical- energetic level, on a spiritual level – to a performer and to an audience. But more importantly to try to understand and embody Ireland’s relationship with religion, in both a genuine and aspirational sense, particularly the symbol of Ireland as “Mother”, and our particular affinity with the Virgin Mary- coupled with the idea of Ireland’s male aspect as sons rather than heroes.

I’m working with four dancers (3 women and 1 man), and a group of five young freestyle dancers from Dance Republic in Carlow. Freestyle is an aggressive and virtuosic competitive style of dance and the girls who take part are seriously dedicated. I like to consider their passion and dedication as a form of spirituality.

In Spring 2017 I made a piece, This Thumping Heart, with Dance Republic, for ten teenage girls. It was during this process that an unlikely scene played out in my head: a group of young white disco dancers gate-crashing a Sufi- Zikr prayer gathering ¬– imagine if that happened? The ideal outcome would be that they look at each other and see they are on a similar plain. They both have so much hope and ambition for their dance, putting all of this emotion and passion and pain into their dancing - the kids just haven’t named their god, while the men have.

It’s an unlikely thing to occur, and certainly not something I’m interested in engineering or appropriating for the stage, but as a thought, this collision of worlds is perhaps what we need to make space for empathy: the abandon and raucousness of pop culture meeting religious prayers, and each recognising that maybe they’re reaching out for the same thing. My own cultural reference point for this is of course the Catholic Church, and I’m working with Resurgam choir, who are singing liturgical hymns during some of the piece.

In Here be Dragons the young dancers part is to embody strength and empathy simultaneously. When I was writing about this part of the piece, an unusual phrase kept coming into my head: Little white girl, you’re starving. It serves as a reminder of the cultural and social context that we are part of, owning and emboldening. The girls’ presence is an attempt to conjure many images from Mary at the foot of the cross; shamanic healers; innocents; angelic warriors. The main intention that I shared with them was to crack the statue of the Virgin Mary from the inside out, with love and recklessness.

The middle section of the work, ‘Sweet Saint Son’ is a solo for a male dancer. It’s an ode to Ireland’s sons, embodying a spectrum of imagery and physicality from the image of Jesus through to the stereotypical Conor McGregor style machismo. It’s attempting to purge anger, the expression of it being a form of rejuvenation. The solo is also a conduit for the people whose exterior persona and actions project hate, that they too were innocent, dependent babies once too. Babies don’t hate. Hatred is nurtured by society.

A third section of the work in development is for a trio of women, a dance dedicated to Mary, to our own mothers and ancestors, to the ancient triple Goddess, and all who came after. It’s a form of revering and freeing the most powerful woman in the world who is laden with the impossible paradigm of Virgin and Mother. I have called this part ‘Death of the Virgin’.

Death of the Virgin feels personal, in thinking about my own dancing and where I came from.

My original training was in ballet, which I’d liken to a religious practice. I started taking ballet very seriously around the age of ten, willingly sacrificing teenage mischief, for training instead. When I went abroad to study, it was like entering a convent and looking back I think classical training has a similar effect to a religious vocation, and what religion does to a body, repressing and curating the body. But they also share many positive aspects, like the sense of euphoria and on a rare occasion a feeling of communing with something higher than yourself. Ballet displays itself through a lense of beauty, similar to religion. Beautiful symbols, beautiful architecture, and highly sculpted narratives. The trio I’ve started making feels like a real deep dig into my own dancing, but also trying to break away from form and comfortable patterns for the three dancers, letting go and allowing dance to be for something, rather than about something.

* As told to Rachel Donnelly.