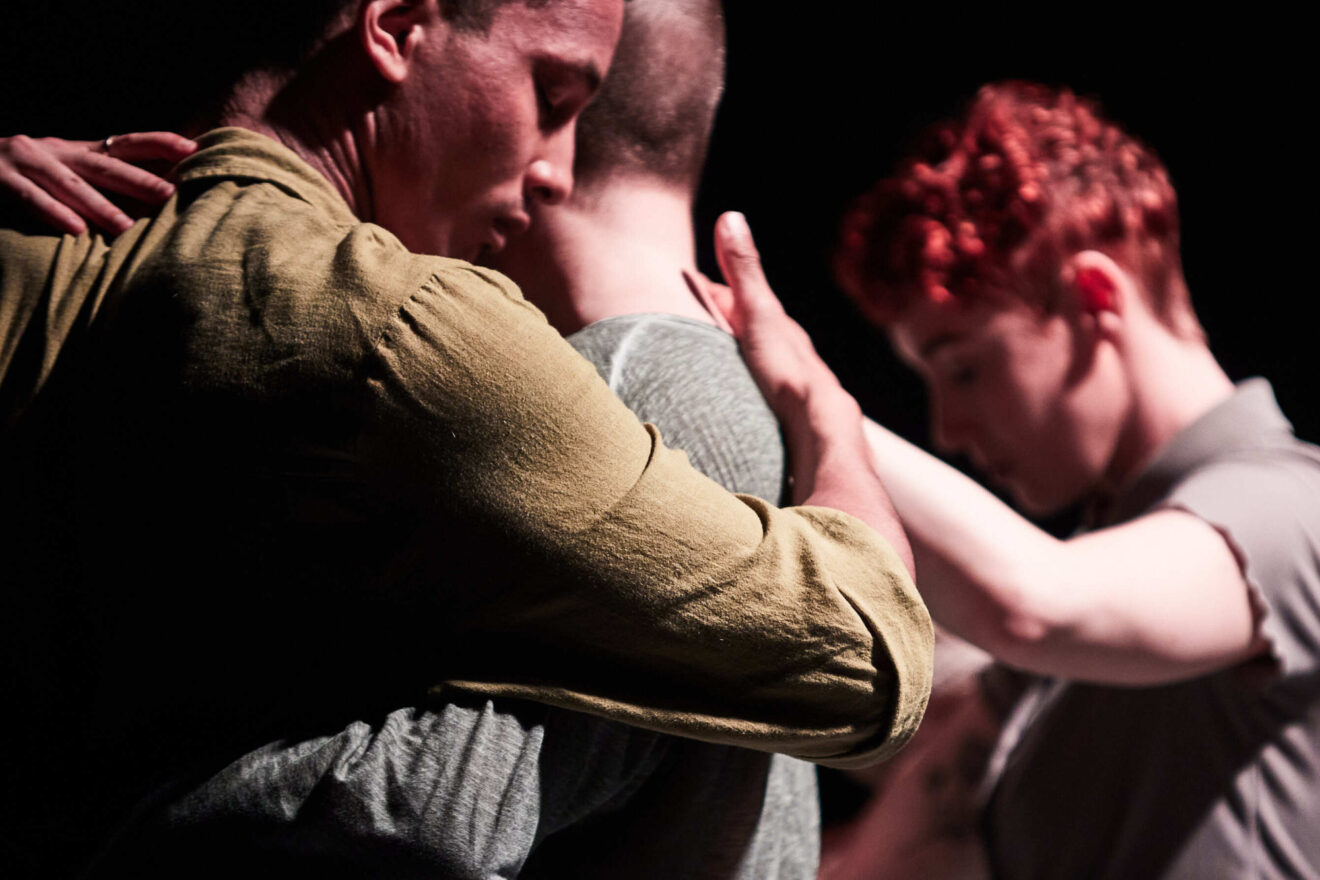 Shuffling in to Project Arts Centre’s Space Upstairs the thin space between the wall and the seating rig opens up to reveal a stage cut in to four horizontal strips by three thin lines on the floor. Peering through the darkness, stage right hides a small band featuring a live cellist, percussionist, bassist, and a singer.

As the audience shuffle in we are met with rhythmic music reminiscent of some ancient machine buried deep underground, its cogs resonating with the earth itself producing a metallic drone felt in the pit of your stomach syncopated by a morse code-like tapping. Our shuffling is matched by the dancers themselves already present on stage: to the rhythm of the music five figures dressed in nondescript drab clothing move in a separated line from spot to spot, hands clutched to their torsos just above the stomach, a form that quietly screams anxiety. I’m struck by this familiar pose, something akin to someone waiting for a diagnosis in an oncologists, or the waiting room of an NCT centre. We’re informed of the absence of an important player: one of the dancers has unfortunately taken ill at the last minute and will be partially replaced by the director Catherine Young for a number of key segments. The anxiety depicted by the dancers then is, at least partially, real. Even with the missing dancer what follows can only be described as truth through movement.

The dancers begin as isolated subjects, and each interaction between one another has an almost atomic quality: in one swift movement a figure collides with another causing a reaction, some minor and others ending in an explosive shaking of ones body and arms as though arguing with themselves in a bathroom mirror in some terrible hallucination. These sporadic interactions bring to mind two drunk office men after a long day of work fighting one another not to win, but to release the physical tension built up throughout a day of denying oneself humanity for the sake of business. These are bodies colliding and exploding in response to some other unseen power that cannot be affected, but constantly weighs heavily on the mind and spirit. The dancers present the terrible truth that we lash out at those with less power than us as an alternative to fighting those who are in power and are thus untouchable. 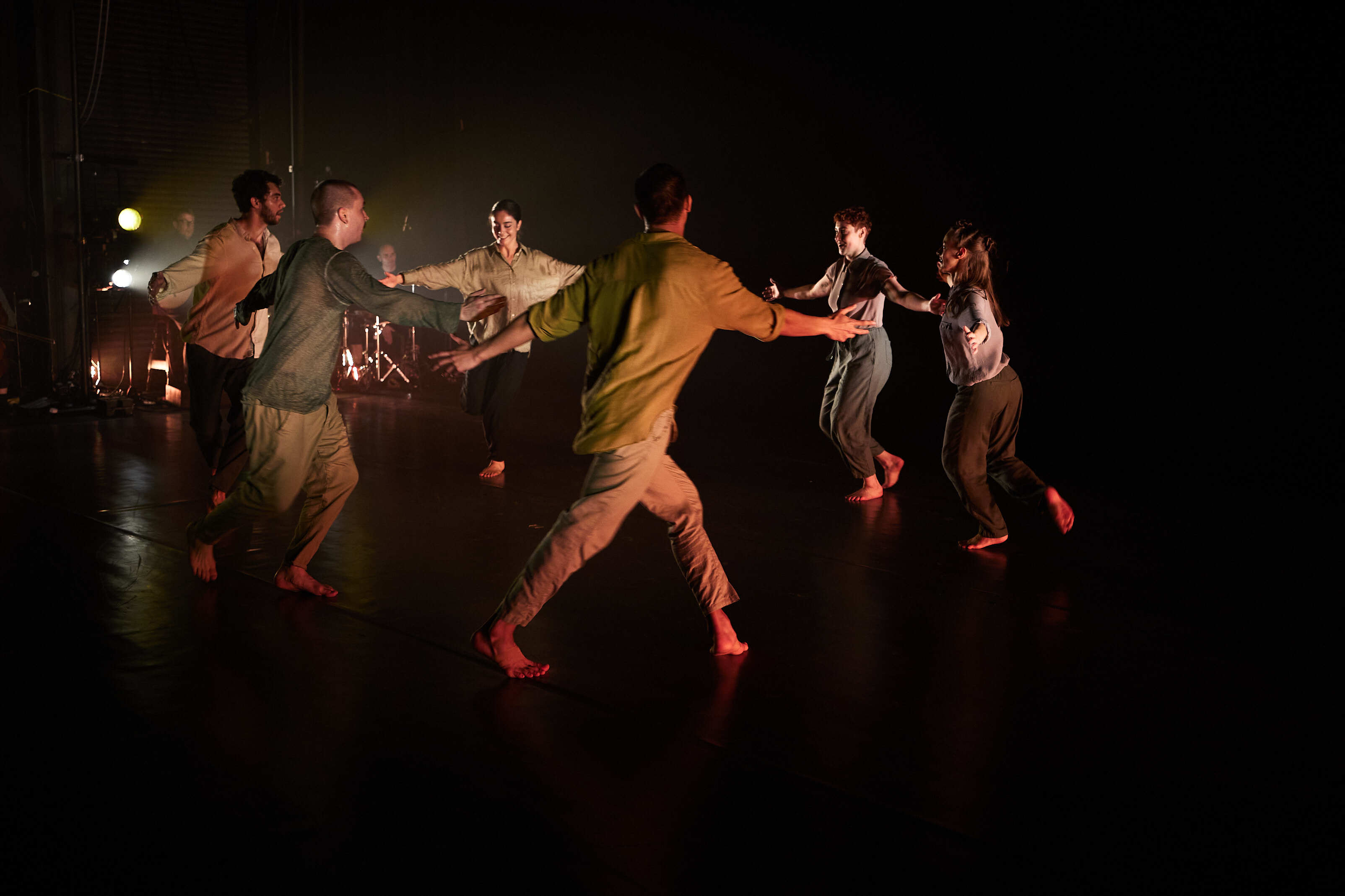 A Call to You captures the visual and emotional essence of in-fighting, the dancers form micro-communities that move to those individuals left isolated and demand integration or face the consequences. Their miniature troupes huddle together and in unison move about the stage, none within the huddle missing a beat or causing any variations to the agreed up style whatsoever. These groups disperse and reintegrate when faced with opposition that upsets their status quo or when some new more convincing member steals away a number of dancers to form their own troupe. Director Catherine Young has endeavoured to present a community in its nascent state, a point in time where dispersed and displaced peoples search for something to bring them together to form a safe and solid collection.

The faces of the dancers reflect this hopeless infighting, each one gradually becoming more haggard and tired from the endless movement with no hope of a resolution. The interactions of aggression cause a number of members to fall to the floor with anguish, only to be picked back up once again to continue the fight for mere existence. These images of fighting, arguing, and confused interaction culminates in a lineup of tired souls punching the air, their first instance of true unity. In an instant, the narrative changes and Young joins her dancers on stage for the extravagant second half of the show, an explosion of folk dance-inspired spinning and synchronisation celebrating unity through diversity.

The music too has changed: the rigid and oppressive beat highlighted by the mournful singing from earlier breaks and gives way to a lively and empowering style that yearns for a better future. Young’s work researching folk dance and other folk traditions is wonderfully foregrounded as the troupe take one another’s hands and begin their shared dance, reminiscent of the spinning members of a céilí, Sufi Dervishes in deep meditation, or the Palestinian Dabke. The energy in the theatre is electric, through my chair back a number of tapping toes can be felt, and on stage the dancers cannot help but spin and move with bright eyes and wonderfully natural smiles and the occasional “whoop” of excitement.

The production came together from inception to performance in an extremely short two months. Rather than giving the piece an amateur and unrehearsed feeling this short run-up lends it a fantastic spontaneity that meshes perfectly with the highly emotional second half. Rather than focus on a rigid set of agreed upon movements akin to a classic piece of dance theatre A Call to You allows itself room to breath and accept itself as a new piece of work that draws upon many different origins. This mixing of contemporary and folk dances reiterates the energy of a diverse community and acts as a superb authors signature as the viewer can see Young’s previous work with dissident and displaced communities. This sudden shift from the disparaged and isolated dancing to a roaring, yelping explosion of fun offers up a distinct sense of optimism for the future. Without having to speak a single word the dancers demonstrate the power of collective action, and after so many years of global self isolation A Call to You is a wonderful balm for the soul that encourages and embraces difference in order to proclaim a better future for all.

Written by Tim Leech-Cleary, and curated by Saoirse Anton